The Garden of John DeMoss 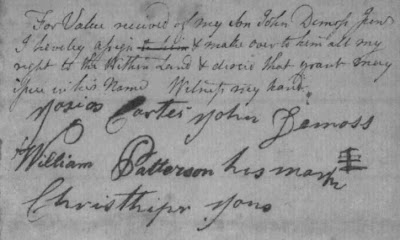 "For Value received of my SonJohn Demoss Junr..."

This is part of what is on the back of a patent for property in Harford County, Maryland.

This property was apparently settled by John Demoss . in 1789 when it was surveyed. It was patented to John Demoss Jr. in1802 as "Demosses Garden."

The patent itself is interesting, but the acknowledgement here that John Demoss was the father of John Demoss Jr. solidifies the connect between the two men. One can never assume that a Sr. is the father of a Jr. In this case, the father leaves no will or estate settlement which is what a person would typically use to make parent-child connections when real estate is owned.

Not all patents include information on parent-child relationships on the reverse. In this case, John had the property surveyed, but before the patent could be issued, he transferred it to John. There's no REAL reason that the relationship between the two men had to be stated. I was fortunate that it did.

I'm wondering if John Sr. actually owned no real estate at his demise and that's the reason for no will or estate settlement. It also looks like John Sr. had no other children, or at least none that survived to adulthood. This statement is supposition on my part and only based on the fact that there are no Demosses in the area of approximately John's age and "generation."

I'm working on an analysis of John Demoss' property for an upcoming issue of Casefile Clues.

The image below is a screen shot indicating the source. In the newsletter, we include complete citations. Sometimes on the blog we don't. Clicking on the image will pull up a larger version. 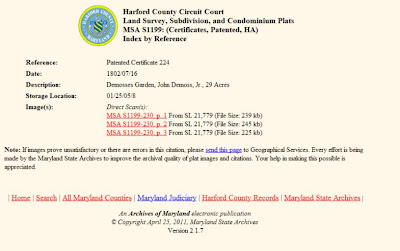