I was looking for a reference to Jurgen Goldenstein my great-grandmother's brother who was a career Marine. Not certain how his first name was in the database, I searched for the last name of Goldenstein and came up a reference that struck my interest: John L. Goldenstein. 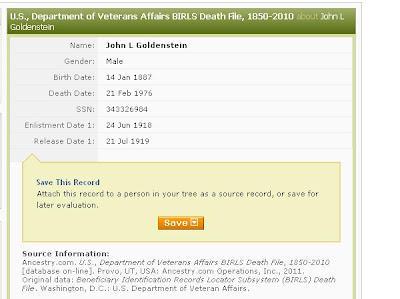 The name John L. struck my interest as the grandfather of Jurgen Goldenstein was Johann Lucken Goldenstein. I thought this John L. probably was another brother of my great-grandmother, but was not certain. I wanted to be certain I had the "right" person, but didn't want to spend hours doing it. I knew John lived in Golden, Adams County, Illinois, from the early 1910s until his death and that he had been born in Dawson County, Nebraska, on his parents' homestead. John's World War I Draft card told me that I had the right person. 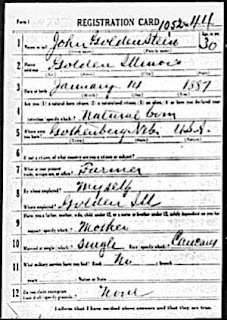 The details on the World War I Draft registration card, particularly the place of birth in Gothenburg, Nebraska, and the mother being dependent upon him (the father of these individuals died in 1913). The date of birth on the draft card matched the date on the veteran's death file at Ancestry.com.


Now another military veteran to research. This one I was totally unaware of until the search on Ancestry.com.