Farming Along the Tracks

The west edge of my Grandpa's farm was along the railroad, but I never saw a train. The tracks were abandoned before I arrived on the scene. Those tracks apparently were originally owned by the Carthage & Burlington Railroad Company.

There wasn't much to the Carthage & Burlington Railroad Company. They had a relatively short line which apparently ran from the Illinois side of Burlington, Iowa to Quincy, Illinois through the town of Carthage.

The farm owned by my grandfather was purchased in the 1930s and wasn't owned by a family member when the railroad was established. Now that I've got the stock certificate I'm a little curious as to when it was abandoned and whether or not it was running when he purchased the farm. That story will have to wait for another blog post.

County atlases (or plat books) are one great way to find maps of where these former railways ran and the 1874 Atlas of Hancock County, Illinois, shows the path of the railway as shown in this image below from Prairie Township. The area where my Grandfather's farm is located isn't shown in the post so that the name of the railway could be a part of the illustration. 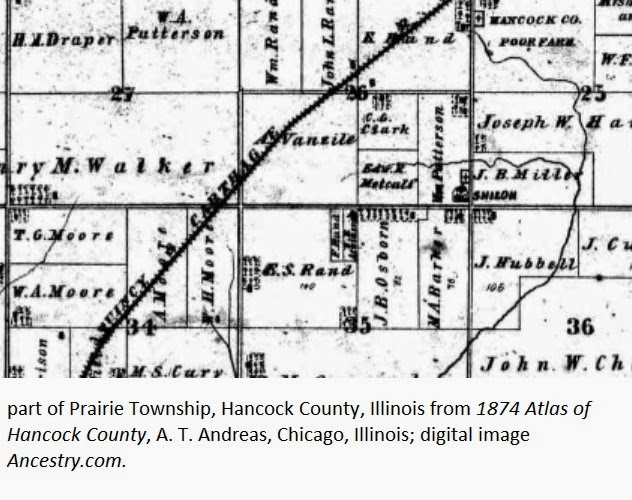 There can be other places to get these maps. The Library of Congress in their American Memory collection has a set of railroad maps. Those maps are more detailed and county atlases will give the researcher a better sense of whether or not the railway impacted the property of their ancestors.

Another ancestor in Prairie Township had the railroad cut right through his property. That rail line was eventually used as a border when the farm was partitioned in the 1930s. But that's another story.