That Photo With the Vague Back 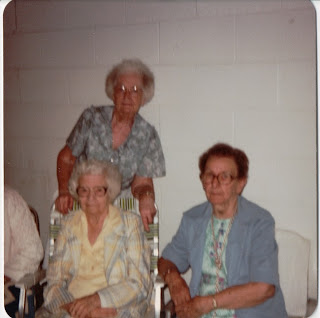 This is the front of the photograph whose back we posted a few days ago. Fortunately I knew one of the individuals in the picture without the identification on the back.

This is the reverse side of the photograph as published in an earlier blog post: 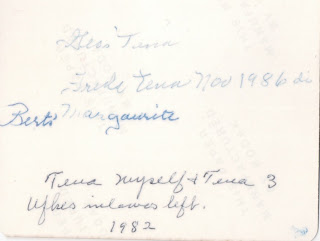 I'm not exactly certain who wrote on the photo, but here is what the back says, along with some annotations.


The photograph was apparently taken in 1982 and is of Tena (Janssen) Ufkes, Tena (Bruns) Ufkes and Margaurite (Wetterich) Ufkes. The three were sisters-in-law and were married to brothers George Ufkes, Fred Ufkes, and Bertus Ufkes--hence the phrase "Geos' Tena" and "Freds Tena."

The "Nov 1986 di" reference after "Freds Tena" is an apparent reference to her date of death of November of 1986.

I'm not certain where the photograph was taken, but if I had to bet, it was probably in July of 1982 at the Ufkes reunion.

Sometimes without knowing a little bit about the family it makes it difficult to really understand what the person meant--especially when the clues on the item are a little cryptic.
-----------------
Note: Tena (Janssen) Ufkes, wife of Fred, is my great-grandmother.
Posted by Bubba at 12:12 PM