I really like this picture of my great-grandparents and their two youngest children. Unlike many photographs I have, it doesn't seem staged--the clothes are on the line, after all. And the daughter seems to be shooting her father a funny type of look.

But identifying the picture got me to thinking... 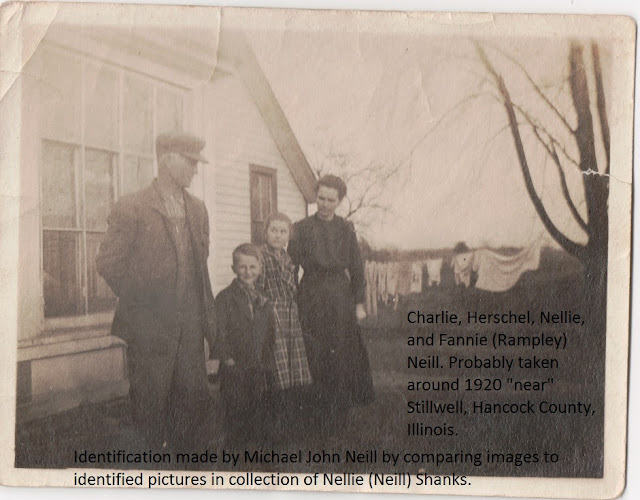 I'm still toying with ways to include "metadata" with pictures. I realize that when creating graphics files there are other ways to include details such as those I've written in black on this document without putting them on the actual image itself.  One concern I see is that not all users of graphic images readily access such metadata and some may inadvertently bypass it entirely.

Genealogists who are not necessarily adept with their computer skills may simply copy and paste the image into their own graphics program or genealogical software--thus bypassing any "metadata" that is not an "immediate" part of the image and unintentionally overlooking key information.

And if the image gets saved without any identifying information, then it's just an old picture of some dead people.

Email ThisBlogThis!Share to TwitterShare to FacebookShare to Pinterest
Labels: pictures

I too have been trying different methods to add the "metadata" to a photo. I agree the best way is to see it with the photo or it will be missed. Instead of writing it directly on the photo I open the photo in paint, zoom out a little, and click and hold the small box at the bottom (or corner, or side) of the photo, pulling down or out, creating a "white space" to the size needed and where you may add text, drawings, or shapes. This box extending tool is tiny and easy to miss and the help in paint does not mention it's use. I also use this after I have "cut out" a digital newspaper article with snipping tool. I can then add the newspaper information to my clipping.

These are both very good ideas that I had not thought of. I've amassed a large photo collection and am constantly trying to organize it better & preserve it smartly.

I copy photos and/or scanned newspaper items into a WORD document adding the appropriate details and cite the source.