There aren't many genealogy reference books that I use on a regular basis. And the ones I have that are nearly falling apart from almost daily use are rarer still. 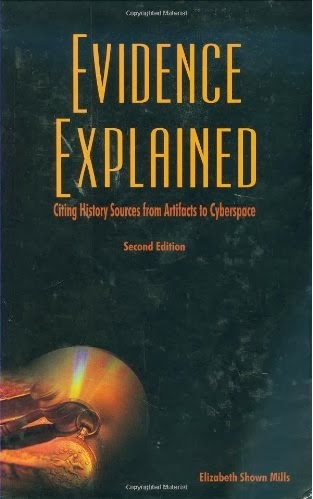 One of those books is  Evidence Explained by Elizabeth Shown Mills.

The book is not cheap and it's not small--it's nearly 900 pages. Chapter 1 provides an overview of evidence analysis and chapter 2 provides an overview of citation theory. The chapter on evidence analysis is one that it sometimes doesn't hurt to read over more than once. The chapter 1 and chapter 2 of my book are littered with penciled in comments and notations.

I'll be honest. The world won't end if you use a comma instead of a semicolon in a citation. Seriously. It really won't. But the section on evidence analysis (chapter 1) gets at some ways to avoid mistakes in research--and that's something many of us could benefit from reading. Even if you take a "less formal" approach to your research, there are a lot of things to carefully consider in chapter 1.

And it all gets at trying to present an accurate a picture of our ancestor as possible. And that's always a good thing.

Remember that the majority of us who follow as best we can the tenets of  Evidence Explained are not members of the Genealogy Police.

The rest of Evidence Explained has citation guides for a variety of records around the world. Even if you don't follow the citations to the letter, the discussion of the sources, while broad, can be very helpful for advanced beginning and intermediate researchers. The discussion of the citation sometimes gets at how the records are frequently organized--always a good thing to know.

The discussion of county-level records for the United States as a whole must be broad and general (that's a large territory with significant variation)--but there's still a great deal of learning that some researchers can do in those sections. The discussion of federal records is also strong and any US researcher would be well served by reading that section, even if they had no intention of following the citation guide down to the letter. I don't follow  Evidence Explained to the letter in Casefile Clues, either. I try to use it in spirit--not as dogma. Mills does suggest that her tome is a guide, not an edict.

The book is available in electronic format, but I'm such a Luddite that I have my print copy and have been known to put it in my carry-on luggage.

And my copy of  Evidence Explained is written in all over. It's one of those books that's a working copy, not an archival copy and as a result my print copy looks used.