Renters in the Paper and References to the Dead

I posted this image on Search Tip of the Day in reference to OCR search concerns, but as I looked at the text of the item I realized that there were at least two other genealogical points which it makes as well. 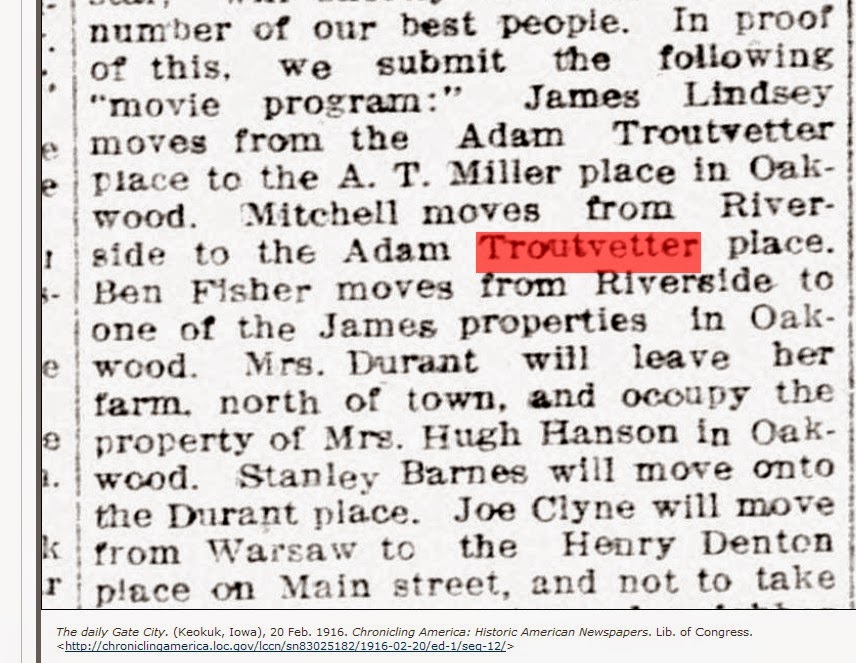 The item, from the 20 Feb 1916 issue of the Daily Gate City, discusses "moves" taking place on various farms in Hancock County, Illinois' Montebello Township (located along the Mississippi River). Spring was a popular time for renters to migrate from one farm to another, and newspaper accounts in rural weekly papers are probably one of the few places to find references to such moves.

Leases and rental agreements between landowners and tenants were frequently not recorded in any official location and it's possible that some rental agreements were only "sealed" with a handshake and not even a signature. Those with ancestors who were tenant farmers may consider looking in the local "gossip" columns for mentions of their ancestor. Court records may reference the lease if there as a disagreement between the tenant and the landlord that resulted in court action.

Unfortunately those of us with ancestors who were hired men typically won't find them mentioned in newspapers in the way in which some tenants are.

References such as these usually refer to farms by the name of their owner or former owner. By 1916 Adam Trautvetter had been dead for several years, but apparently locals knew the farm by that name. This is another reason that some relatives may appear in newspapers after they are deceased--in this case several years and long after Adam's estate had been settled in the local probate court.