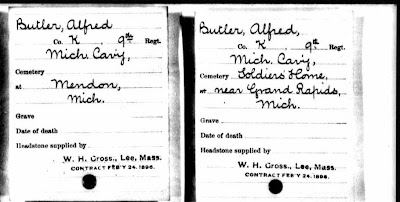 A search of the Headstones Provided for Deceased Union Civil War Veterans, 1879-1903 turned up two cards for headstones provided apparently for the same man. The cards have to be referring to the same man as there can't be two Alfred Butlers in Co. K of the 9th Michigan Calvary. While it is possible that there is, the chance is fairly slim.
I think this Alfred Butler is the same one who is the son of Benjamin Butler in an 1850 Census enumeration in St. Clair County, Michigan. I'm working on Benjamin and Alfred for an upcoming issue of Casefile Clues. If I get this figured out, I'll post an update here. Hopefully two cemeteries claiming him results in more records.
Posted by Bubba at 9:39 AM