An Issue of "Issue Instanter" Means that Short Phrases Matter

Those little notations on documents are important. Sometimes they are the most important item on the document and woe is the genealogist who ignores them as "meaningless."

An 1860 letter written to Illinois Governor John Wood by Illinois State Penitentiary Warden Samuel K Casey attests to the model behavior of Lawrence Knaeble an inmate. Knaeble was convicted of manslaughter in Hancock County, Illinois, in 1858.

On the bottom left hand corner of the letter is the phrase that appears to be "Issue Instanter." Loosely interpreted, this appears to be a notation that the pardon was to be issued immediately or as soon as practical. There is no indication of who wrote the order on Casey's letter, but it clearly was not written by him looking at the style of handwriting.There are several other documents and petitions in the Executive Clemency File for Knaeble dated 1859 and 1860. This is the only document in the file that makes any reference to a pardon being granted. There is an earlier letter from Warden Casey which also testifies to Knaeble's behavior. 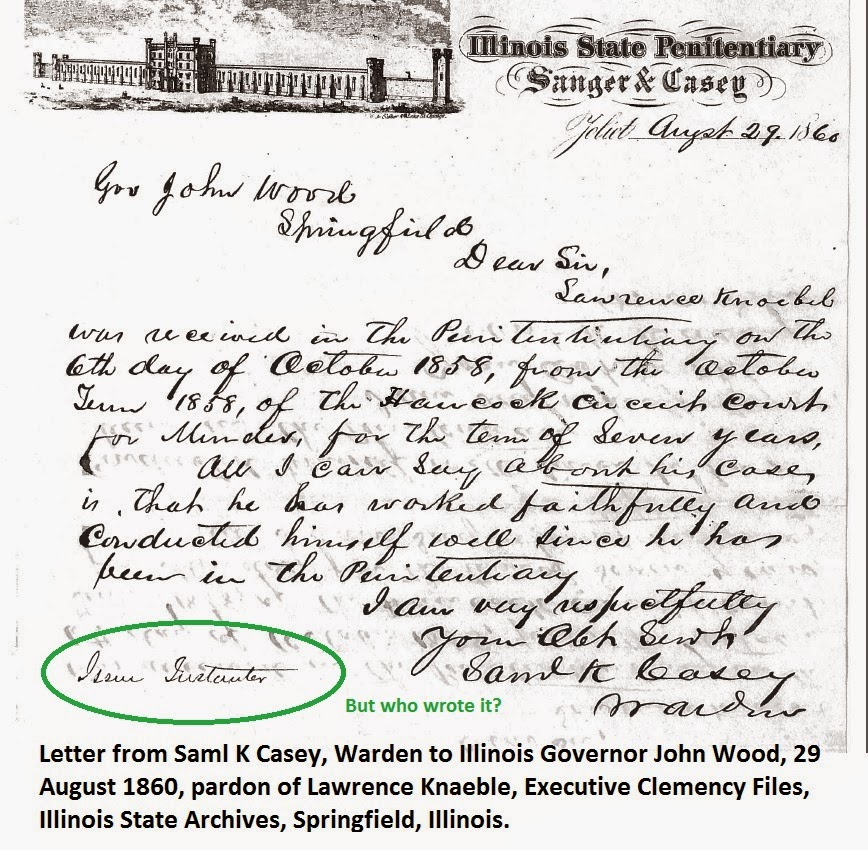 Knaeble was pardoned by the Illinois governor on 10 October 1860. A petition from over 100 Hancock County, Illinois, citizens was filed on 8 October.

Those little words can sometimes mean a lot--to prisoners as well as genealogists. Make certain you aren't ignoring them in your research.

We'll have more details on Knaeble's conviction and just what happened outside that dram shop in Warsaw, Illinois in 1858 to land him in the Joliet prison.
Posted by Bubba at 1:05 PM