A Request for Ancestry.com

I'm not always big fan of the suggested record "hints" Ancestry.com gives us to database entries. But as a realist, I know that genealogists use them frequently and, I will admit, I use them occasionally when I'm really stuck. It seems like when I'm really stuck, I'm more likely to have the problem described in this blog post.

The "suggested records" are apparently obtained using a secretive process shrouded in mystery. But I'm guessing that they come from at least two places:

The image below is the individual record for Benjamin Butler in the 1870 United States Federal Census. The green lines indicate records that I know (through research) to have been the same Benjamin Butler shown in the census entry from 1870. I'm guessing that the 1850 match came up because it was a close match to the 1870 census information. The 1880 match I'm guessing came up because other Butler researchers have tied in to the same Benjamin Butler in their files to which this 1870 census reference is tied.

Heaven only knows about the others, which I've overwritten with red question marks. My guess is that other researchers have somehow connected something in those records to something to which they have tied Benjamin Butler. I almost wish that Ancestry.com would "star" or mark those "suggested records" that came from pure database searches and those that came from records other researchers have somehow tied to the record being displayed.

The off-the-wall suggestions given are not the point of this post. And Benjamin doesn't even illustrate my problem. 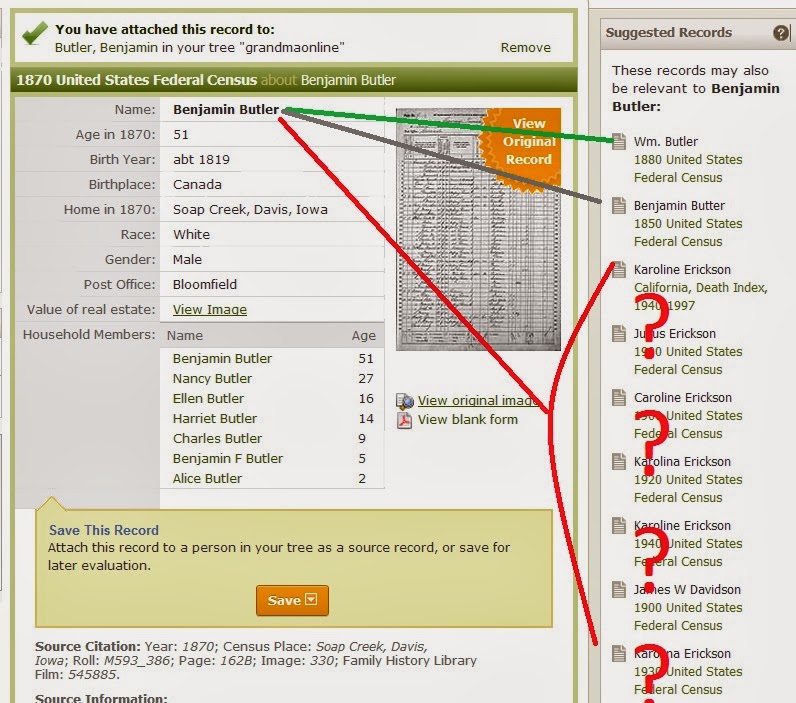 But he is part of the problem.

I'm stuck on Benjamin in 1860. I cannot find him. I do have him in the 1850 census in Michigan. The image below shows the individual database entry for one of the children living in his 1850 household. The name was originally transcribed as "Butter," but it's clear the name is actually Butler.

And there is the problem.

Ancestry.com has no recommendations for Alfred Butter. This is one of the few times when I really would like to see their recommendation. The problem is that there are none. 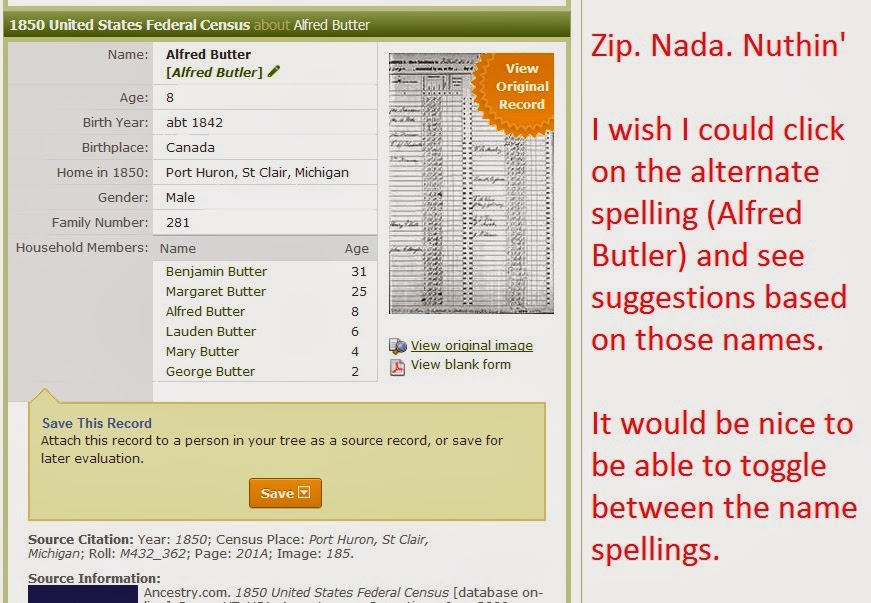 I thought if I clicked on the alternate spelling that I'd get recommendations for alternate records using that name. Nope.

All I got was a page indicating who suggested the alternate and why they suggested it. That's fine--another potential contact person.

But what I really would like to do is to be able to "switch" the names so that the suggested records pulled up are based on Alfred Butler, not Alfred Butter. That would help. 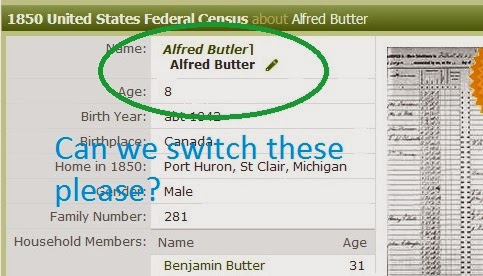 I'm betting that most of us with problem people occasionally have problems because of transcription errors.

I'm hoping for a change, but my gut tells me it won't happen. I'm still thinking my picture is on someone's dartboard at their corporate offices.