The signatures come from the settlement of the estate of John Trautvetter in Adams County in 1938. 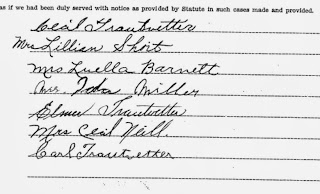 Sometimes the use of a husband's first name when she signs "Mrs. Husbandfirstname Husbandlastname" can mean that the husband is still alive. There are four women who sign this document:


If this document were used to draw any "rules," it would be impossible. The only widow in this list is Mrs. Ida Miller--who signed her first name, consistent with the social "norm." The husbands of the other three ladies were all alive in 1938, including the two who signed their own name.

I'd be hard pressed to use the presence (of absence) of the husband's first name as evidence he was alive (or dead) at the time the wife was referred to as "Mrs."

Mrs. Cecil Neill was my paternal grandmother. I know there were times I saw her use Mrs. Cecil Neill as her signaure and others when she used Mrs. Ida Neill. I don't know when she used which and it really doesn't matter. By the time I was old enough to remember Grandma writing her name, Grandpa Neill was long deceased. She was a widow the entire time I knew her.

Of course sometimes she signed "Grandma" to things, but that's evidence of something other than her marital status.

It's always been my understanding that "proper" reference was either "misses" and husband's first name or just your first name...e.g.:

This is more the "traditional" approach I guess, since it pretty much flies against contemporary political correctness?