The above image is survey plat that was done for 85 acres owned by Thomas Sledd in Amherst County, Virginia. This plat was made in 1802 and recorded in a series of books for this specific purpose. Such plats were necessary in areas where property was surveyed in metes and bounds. County Recorder's offices in federal land states also have plats of this type, but it is easy to see why surveys were needed in states where metes and bounds were used.

Transcribing the text on the right is not so much of a problem, it's pretty much standard material.

It is transcribing the plat itself that will be more problematic and something I'm working on for an upcoming issue of Casefile Clues. It's not linear like the text, but there is information on the plat that I want to retain. 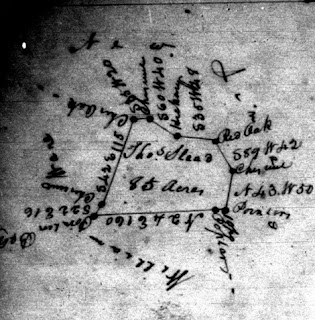 A little looking indicates the name of at least one neighbor is mentioned. William Ware's name appears in the bottom left hand portion of the plat.

There's also "New...." that appears on the top and seems to work over to the right and wind down. The problem with this text is that it is sideways and in places it is difficult to tell where sideways letters are and where numbers are.

If you have landowning ancestors in metes and bounds states, determine if survey maps were retained. These images were made from microfilmed copies of the records while I was at the Family History Libary in Salt Lake.

[I don't know if there was a "Sledd's Hill," but I couldn't resist using that as part of the title of this blog post.]
Posted by Bubba at 8:31 PM

Unless the person recording the land entry made a mistake, it looks like the survey was in April, 1803. The 1802 date is given for issuance of the warrant to Abraham Smith.

By 1802 it would be quite unusual for there to be otherwise-unclaimed lands in VA, although one relative about this time purchased an unused part of an old large-acreage land warrant to claim a complicated thin snaky tract that evidently had not been claimed by his new neighbors. Perhaps this was land deemed too rocky or otherwise not desirable by the earlier claimants.