Finding Goldensteins in the 1940 Census

I've spent a little bit of time using the recently released 1940 census indexes at Ancestry.com. I was able to find (so far) two of the siblings of my great-grandmother, Tjode (Goldenstein) Habben. Great-grandma was easy to find as she was living right on the farm in Hancock County, Illinois, where I expected her to be. Some her siblings were not so easy to locate, particularly the ones who had moved.

Uncle George was living in Whittier, California in 1940: The actual enumeration for George Goldenstein indicated that his educational level was "C5." Uncle George attended seminary in Ohio and I'm guessing that is why the level is listed the way it is. In 1940 he was working for the US Post Office, which he did for the remainder of his life.  Part aof his entry is shown in the image below.

George's brother, Jurgen Goldenstein, was stationed in Virginia (Marine Barracks at the Norfolk Nacy Yard, Portsmouth, Virginia) at the time of the 1940 census. Apparently he had been stationed in San Diego, California, previously. His "record" from Ancestry.com is shown below: 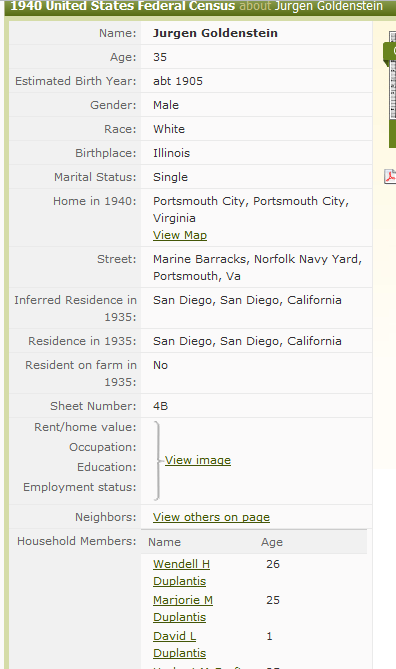 Interesting that Ancestry.com lists the "household" as apparently most of the base.

The actual enumeration for Jurgen is partially shown here:

You can search the 1940 census indexes at Ancestry.com.

Searches can also be made at FamilySearch.

As of this writing the indexes are in progress.
Posted by Bubba at 3:27 PM