The "family register" entry for the family of Bernd (Bernard) Dirks from the St. Peter Lutheran Church in Coatsburg, Adams, Illinois, contains the baptismal information on Anna Margaretha Dirks, my great-great-grandmother.

This image was located in the "Evangelical Lutheran Church of America, Records, 1875-1940" at Ancestry.com. 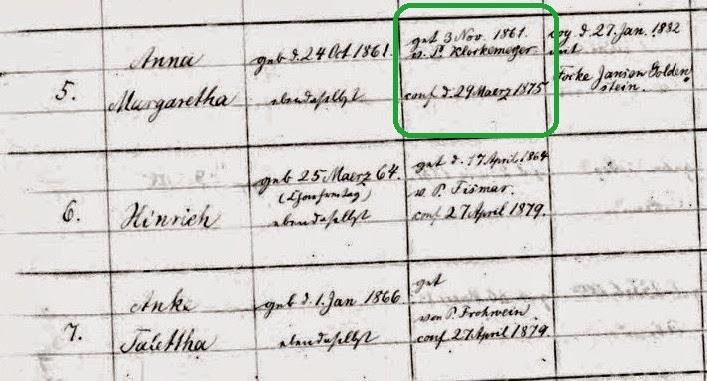 This is the closest as I have gotten to a contemporary birth record for Anna. The birth and baptismal entries were all apparently written at the same time, probably some time after the church's founding--which was after all the Dirks children were born and baptized.

It's very possible some of the dates are incorrect as they were copied from other records.

However, it's still a good clue and, given there are no civil birth records in Illinois for this time period, it is as good as I may ever get. There's no reason to doubt the dates at this point.

What I'm curious about is the pastor who baptized Anna--his last name appears to have been Klorkemeyer or some variant. The letter in front of "Klorkemeyer" appears to be a "P," referring to pastor. The other references contain the same letter and it's doubtful each pastor's first name began with a "P."

Pastor Klorkemeyer most likely lived near where the Dirks family did. Other children were baptized in Keokuk Junction (now known as Golden), Illinois and other were baptized in Pea Ridge in Brown County. Both villages had German immigrant communities and Lutheran churches. Those are probably the best place to begin my search for Pastor Klorkemeyer. The family likely didn't have to travel too far to get to the church where Klorkemeyer was serving.

The problem may be determining what the actual spelling of his name actually was.
Posted by Bubba at 12:50 PM