It is the only lineage society to which I belong. 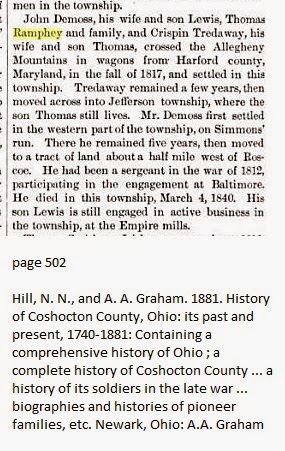 Years ago, when I was still pretty much a kid, I realized that one of my ancestors qualified me for membership in First Families of Ohio. At least I thought I did. Membership in the organization is limited to those who have a descent from an ancestor who lived in Ohio before December of 1820.

A county history from 1881 said that my family moved to Coshocton County, Ohio in the Fall of 1817. I thought that would be my "proof." A county history should be reliable.

It wasn't good enough. I'm pretty certain county histories were on the list of "unacceptable" items. It was one of my first lessons in what was acceptable and what was not.

Thomas did not appear as buying any property in Coshocton County before 1820, so that was not an option. Even if he had purchased property there, a case could be made that he might have been a non-resident landowner.

Thomas was also not on the 1820 Ohio census. That would have been too easy.

To make a long story short, my proof that Thomas was in Ohio before December of 1820 rested in Maryland.

Thomas was sued in Harford County, Maryland because of errors in the legal description of a piece of property he sold. In that court case, he makes a deposition wherein he says that he left Maryland for Coshocton County, Ohio, and that he returned to Maryland from Ohio after his father's death to settle up some affairs. He made it clear that he moved to Ohio before his father died.

The will of James Rampley was admitted to probate in Harford County, Maryland in 1817, sometime after his death.

There was my "proof" that Thomas was in Ohio before December of 1820--but it took several documents to establish that fact.

One of the first times I used indirect evidence. It's indirect because there's not one document that says "Thomas was in Ohio by 1817." Together several documents lead to that conclusion.
Posted by Bubba at 8:54 AM